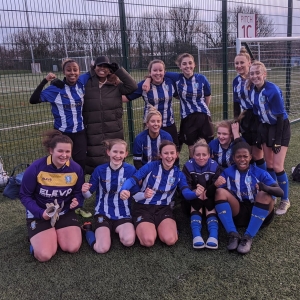 Our two semi-final games finally got played with the teams both on 3G kicking off at 1pm & 3pm (thank you to our opposition clubs for being accommodating with the kick off times.)

Manager Kyle reports.....
After losing out previous meeting to top of the league Millmoor we knew it would be tough but thought we could cause an upset! The first 25-30 minutes we were the widely acknowledged better team, just couldn’t put the ball in the net! Then the last 15-20 minutes of the half, Millmoor ruthless strikers scored with their only three shots of the half.

The second half with the wind behind us we pushed and pushed to no avail, and inevitably while we pushed, we were caught out with a few Millmoor attacks and again the Millmoor strikers weren’t making any mistakes in front of goal.

The game finished 5-0 to Millmoor and they go on to face AFC Doncaster in the final. A bad day for us but one we will move on from, and now concentrate on cementing 4th in the league and trying to push into the top 3. Putting the ball in the back of the net was the difference today.

MOM - a joint one - two players got mentioned to me from several players on the day that they thought they stood out and that was Dina who probably had her best performance of the season, and Kelsey who ran all game and even at 4 and 5 nil kept trying!

Brush our shoulders off ladies, heads up, stand tall, and we go again as a team!

Manager Gary reports....
Extremely proud of the team today after a fantastic win over our neighbour's. 13 players available but both Bethany Awdas and Ella Mcgrorey could have done with the weekend off due to illness but played anyway due to lack of players.
After a first half where I thought we were just the better team we found ourselves 0-1 down at the break But still in the game .
Things got worse right at the beginning of the second half when our keeper Courtney had to come off with a bad injury to her wrist, Millie Simms our striker went in for 10 mins and had to face a penalty almost straight away 0-2 .
We carried on pressing the game and on the 58 min Shannon brown scored a 35 yard powerful free kick, back in the game, a change of keep and Izzy wragg went in for the rest of the match including extra time.
We kept pushing and on the 77th min Millie Simms made it 2-2. We almost wrapped it up in normal time but the post kept out Hannah's effort .
Into extra time and the team talk was don't change anything the winner will come and it did from the penalty spot for Hannah Jackson slotting home after being brought down by there defender.
The character of the team to come from 0-2 down and win was fantastic, bearing in mind that Utd are a 1st division team, for me the best team did win today everyone of them gave 100%, big thank you to Millie and Izzy going in the net and into the final we go!
Thanks to Sufc for making it a entertaining semi final.