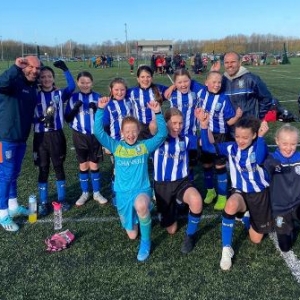 Last Saturday our junior teams featured in no less than four semi-finals with three of them progressing to their respective finals.

Our U11’s probably had the toughest tie of the day when they faced a good Doncaster Belles team in a repeat of last years Cup final where our girls lost out on pens after the game finished 2-2. This time there was no repeat with the youngsters winning 1-0 with the winning goal coming from Eliza Benson. They will now play another very strong team in Barnsley Red, who comfortably dispatched Bramley in the other semi-final. The SHWGL Cup finals are to be held on the 14th March.

Also, through to their Cup final are our U15’s, they were involved in a high scoring semi-final against Penistone Church. The game finished 6-4 with goals coming from Maddie Wilson (4) Georgia Brannan and Lily-May Beevers. In the other semi-final Handsworth beat Bawtry Juniors to set up a repeat of last years Cup final between 1st and 2nd in the league. Last year the Owls went on to win the final 2-1.

In the Shield competition the U18’s played Doncaster Belles in another repeat of last years Cup final where our girls finished runners up. This year the semi-final finished 3-0 to our ladies with goals from Lottie Howe, Molly Wilde and Maddy Highton. In the other semi Sheffield FC Red progressed to the final with a close 4-3 victory over Sheffield Utd which needed extra time to settle the tie.

After a great run in their Shield competition our U16’s bowed out at the semi-final stage with a 5-3 defeat at Worksop Town. Our lot led 2-1 at one stage but just couldn’t get over the line. Well done to Worksop who will now play Chesterfield in the final.

Our Senior Reserves and Development teams had their respective semi-finals called off due to Storm Ciara and will now play this Sunday and hope to make it five out of six through to the finals.

Our Ladies 1st team game away at Bridlington also fell foul of the storms.

The only other games played were league games featuring our U9's who played Penstone Church (results can't be posted) and our U12's who finished 7-1 winners away at Hillsborough Puma's. The 3 points keeps them hot on the heels of leaders AFC Norton but our girls still have a game in hand. Scorers were Holly Lee (2) Kelsey Robinson (2) Ava Forest, Madison Lee and Sophie Wigfield.