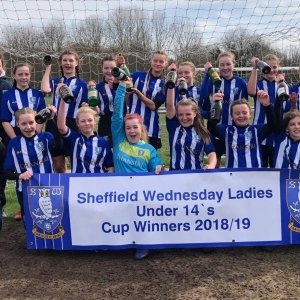 More success for the ladies……

March was a fantastic month for our junior section with no less than 4 teams appearing in Cup finals, two of those winning and also being crowned league Champions and a further team being promoted as league runners up.

Our U14’s were involved in a cracking Cup final against Handsworth. They went 2-0 up with two great goals and looked good for the lead. Handsworth then pulled a goal back and it was a tense final few minutes with Handsworth having a late goal disallowed and the game finishing 2-1 and our girls Cup winners. The girls topped their season off by also being crowned League Champions with a fantastic 100% record.

Our U18’s also made it a “double” of Cup doubles for the club and another 100% season. They had a tough game against Sheffield Utd. After having the keeper sent off in the first half and missing a penalty they went on to score a late equaliser to make it 2-2 before the game was decided with a penalty shoot-out that our girls won 4-3. The girls also were crowned league Champions with a played 14 and won 14 game record.

Finally, our U12's clinched promotion to Division 1 in their final game of the season with a 6-1 win over Beighton Magpies and have assured themselves of at least the runners up spot. Dependent upon 2nd placed Bramptons last two results they still are in with a chance of holding onto the top spot that they currently occupy.

Some of our other junior teams still have games to play and we are hoping to add more silverware in what could be a record season for the ladies section of the club. UTO! #oneteam